At the end of February, I was lucky enough to travel to Israel to work face-to-face with our team in Tel-Aviv. It was primarily a business trip, but I did get the chance to explore the region a little while I was there.

It’s painful to admit, but in Israel I found myself constantly surprised by my own ignorance. If anything, the trip made me realize that there is a lot more for me to learn about religious history, Jewish tradition, and the Middle East.

I grew up in a wine country suburb and like many kids in our neighborhood, I was an on-and-off member of our local church. I’m spiritual, but also conflicted. I have a few Jewish friends, but my understanding of Jewish traditions (and even Christian traditions to a certain extent) is elementary. Needless to say, I was in for a culture shock. 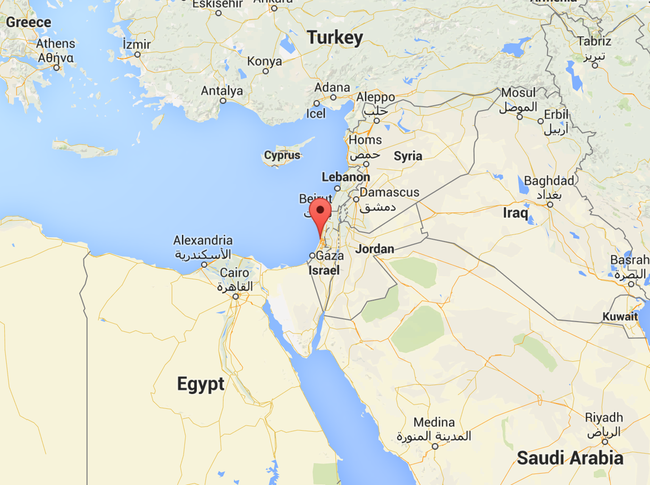 Geographically, Israel is a small country in the Middle East. You can drive from the Mediterranean beaches to the western shores of the Dead Sea (the entire width of Israel) in under 2 hours!

Before visiting, I pictured Israel as an expansive stretch of desert. There were certainly places where this was true. 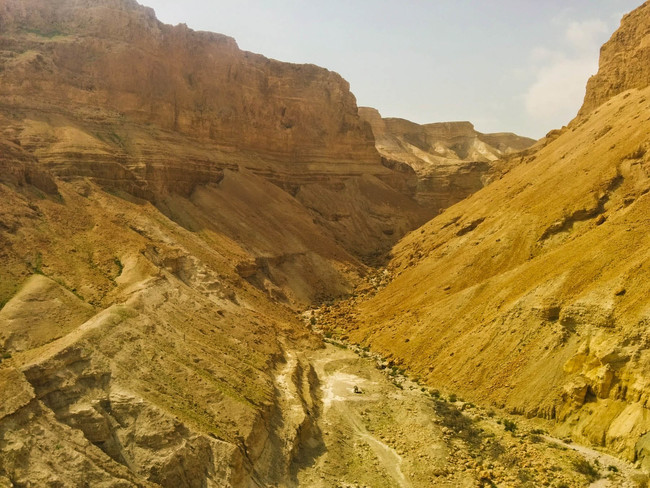 But in reality, Israel has many microclimates. In hilly Jerusalem, it actually snowed the week before we arrived. In much of the Israeli landscape, we saw luscious fields filled with famous Israeli produce, especially oranges.

The photo below and the one above were taken less than an hour’s drive away from each other! 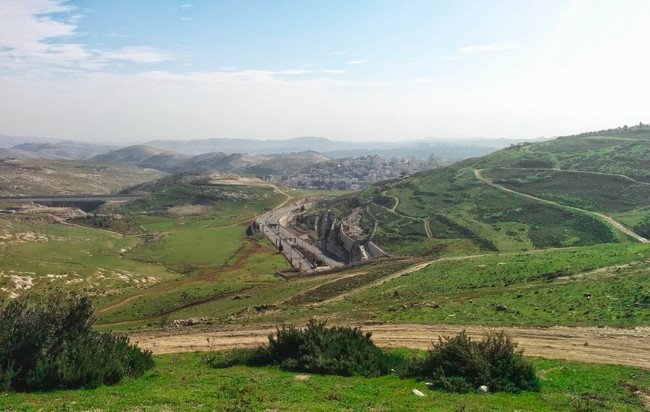 Contrary to what I often hear from the media, Israel is a fully-developed, first-world country, and most places are very safe. The vibrant city of Tel-Aviv, which sits by the Mediterranean coast, feels like the offspring of New York and Miami. 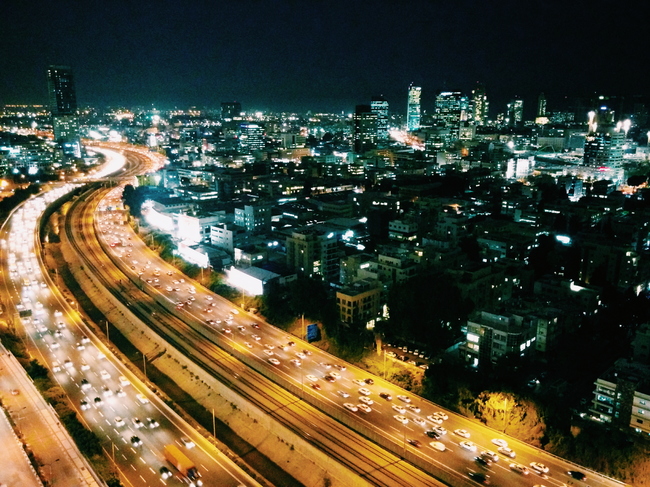 The sunsets on the Tel-Aviv beach are truly to die for. I didn’t think I would ever see a sunset more beautiful than the ones off the California coast, but I have to admit that the Mediterranean sunsets were amazing. 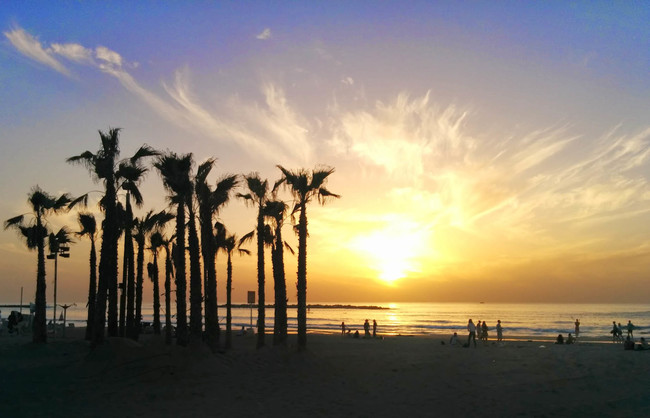 Part II: History of the nation

It’s impossible to do justice to the full history of Israel in this post, but there are few things that surprised me right away.

Israel is a young nation: Israeli independence was declared by David Ben-Gurion on May 14th, 1948, making it nearly 15 years younger than my grandparents! Because of its youth, Israel is, in a way, still searching for its culture. Things that you could call “Israeli” - like the food, for example, is often times not truly “Israeli”, but simply carried over from an earlier time or different culture.

Delicious hummus and falafel - does it count as “Israeli” food? Hard to say! 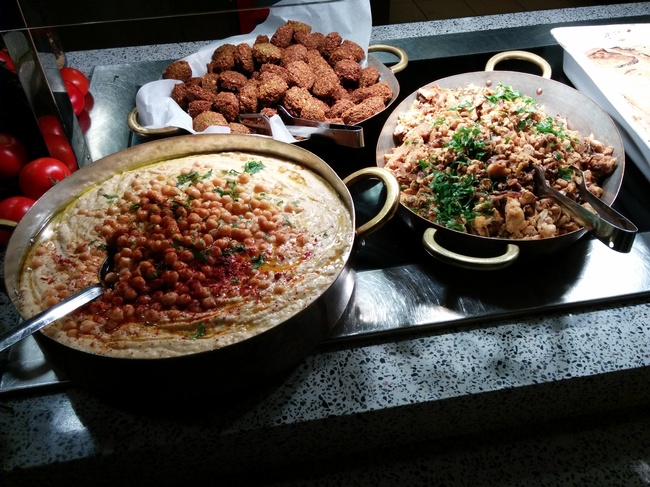 Not all Israelis are Jewish: Even though Israel is a Jewish state, only about 75% of its citizens are Jewish. About 20% of citizens are Israeli Arabs, who are mainly Muslim, but there are a sizable number of Christians and Druze as well. These cultural and religious differences result in a very nuanced and complex relationship between the many communities.

Israeli people speak modern Hebrew: Wait, what do you mean “modern”? Hebrew ceased to be an everyday spoken language somewhere between 200 and 400 CE. It wasn’t until the 19th century that Eliezer Ben-Yehuda led the revival of Hebrew as a spoken language. It is truly an amazing, courageous story. Imagine trying to convince everyone in the United States to start speaking Latin!

Today, Israelis have spoken modern Hebrew for only three generations. Because it is a language spoken only in Israel, nearly everyone learns English as well.

Some snacks from Israel. Hebrew reads from right to left! 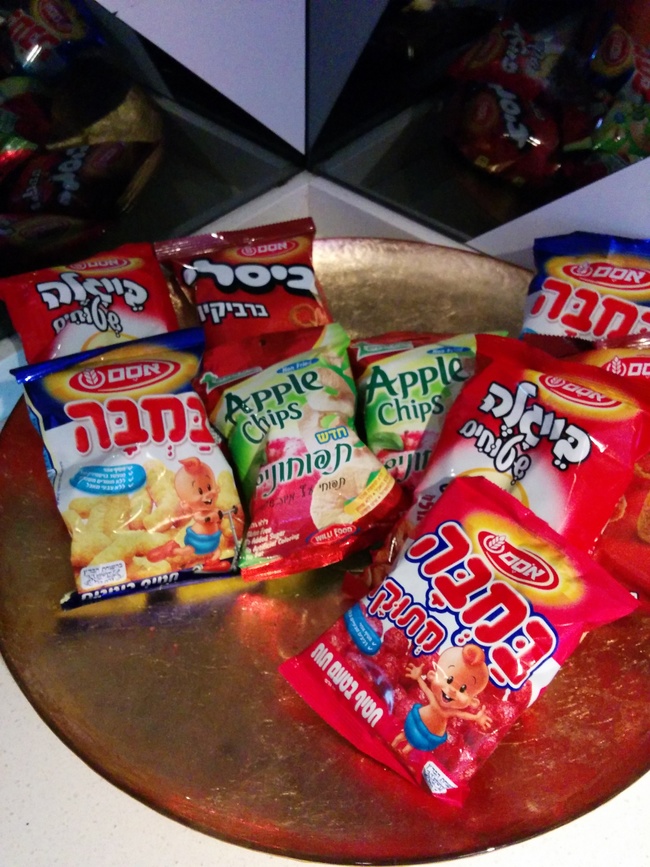 Military service is a part of life: All Israelis, men and women, are required to serve in the military after they finish high school. As a result, aging occurs on a very different scale than in the US. Israelis are often 25 or 26 by the time they finish their military service and university, and at this age they will be only just beginning their careers in the workforce. 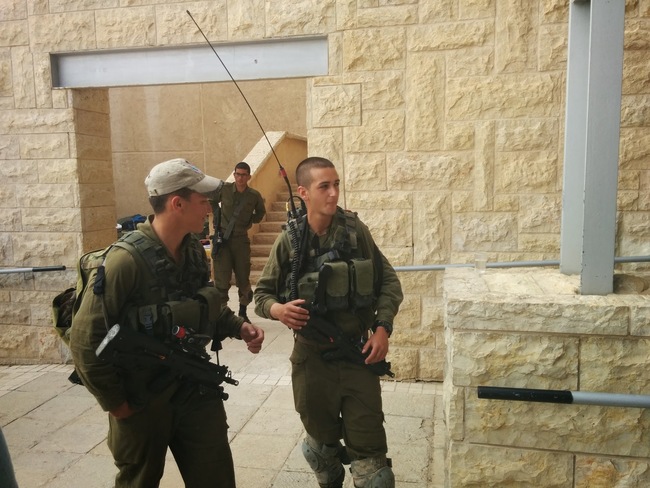 Today, Israel’s main industry is high-tech! Have you heard of Waze, Wix, or Fiverr? All of these are startups from Israel!

My ignorance of Jewish culture was (and still is) cringeworthy. But, my short visit to Israel gave me an entirely new perspective on many wonderful parts of the Jewish tradition.

The Shabbat: From sunset on Friday until darkness on Saturday night, Jewish people celebrate the day of rest. Because of this special day, in Israel the workweek actually starts on Sunday and ends on Thursday.

It is impossible to miss the spirituality and importance of the Shabbat in Israel. When it begins on Friday evening, the city becomes noticeably quieter.

Kosher food: The Jewish dietary law that dictates kosher foods was something completely foreign to me before visiting Israel. A full explanation would be a blog post in itself!

One main Kosher restriction is the separation of meat and dairy (yes, cheeseburgers are not kosher!). Many households in Israel will actually have two kitchens, where food can be prepared separately.

Israel is a heaven for vegetarians and vegans! 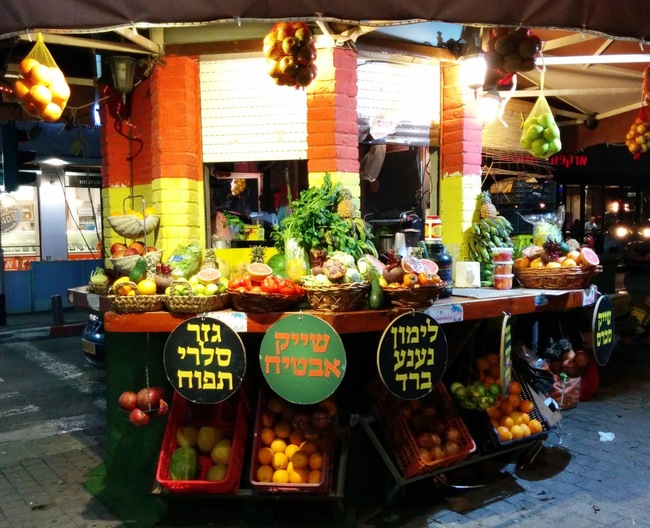 Different people will follow the kosher rules to varying levels of strictness. There can be lot of gray area when it comes to kosher foods.

The Western Wall: We visited many holy, spiritual sites while in Israel, but none could compare to the sanctity of the Western Wall (sometimes called the Wailing Wall). The wall is the surviving remnant of Temple Mount, which is regarded in Judaism for numerous reasons as the holiest place on Earth. 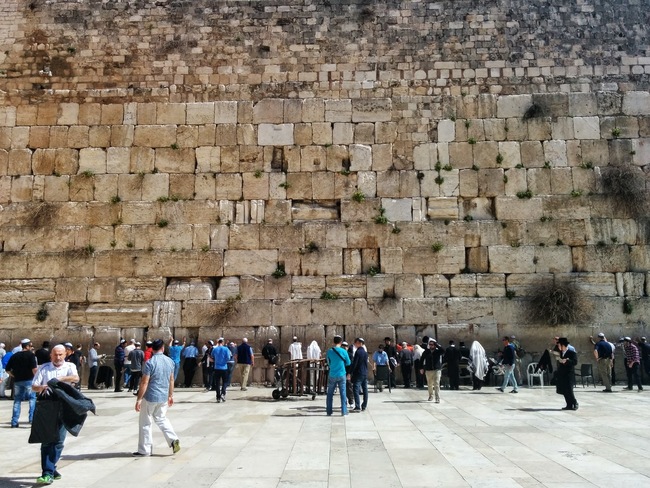 One of the reasons for the intractable Arab/Jewish conflict is the disputed ownership of Temple Mount. The causes and effects of these tensions are so nuanced that many people devote their entire lives to understanding them and working towards peace.

Jewish as an ethnicity: A person can be “Jewish” in a religious sense, but they can also be Jewish based on their bloodline. Many people in Israel are secular Jews - they may even be atheists - but are still ethnically Jewish.

Israeli immigration laws take bloodline into account in determining citizenship. The strong role that ancestry plays in “being Jewish” was a surprisingly foreign concept for me.

I was very lucky to have this wonderful chance to see different parts of Israel. Here are some other random highlights from the trip!

Inside the Church of the Holy Sepulchre, which contains the site of Jesus’ crucifixion and tomb. 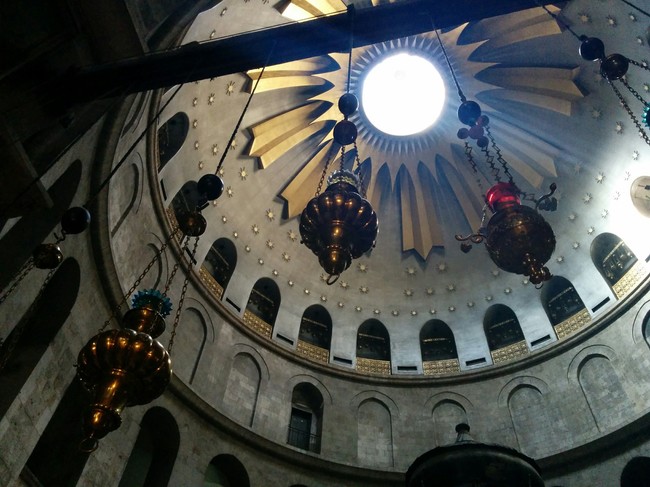 Walking along the Via Dolorosa, which is the path that Jesus walked, carrying his cross to his death. 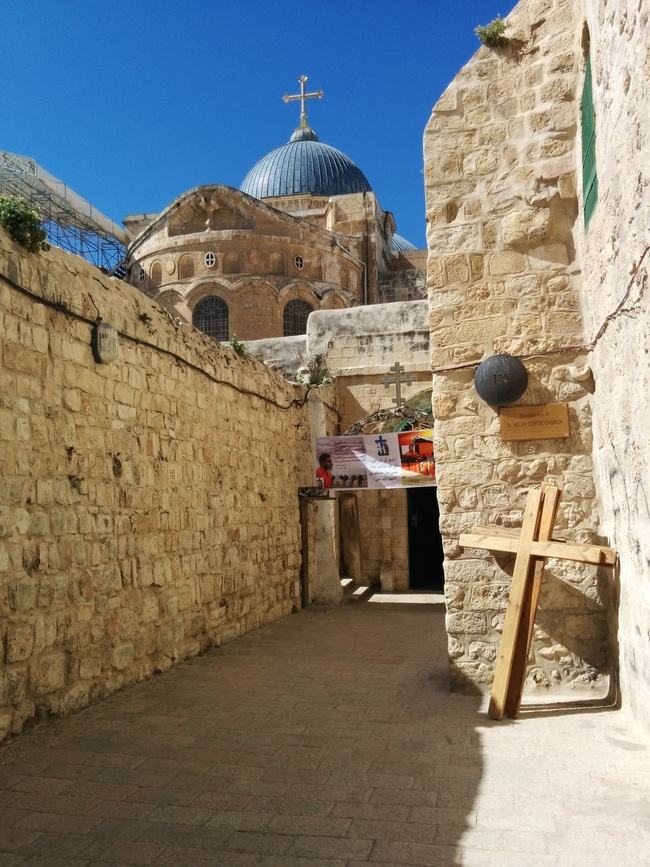 Israeli art is vibrant! This was inside the Tel-Aviv Art Museum. 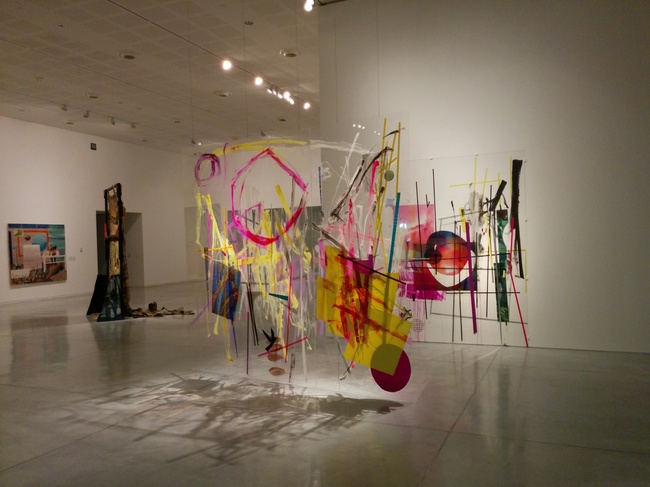 I mopped up during poker night with our team. That is a Goldstar, an Israeli beer - it was pretty good! 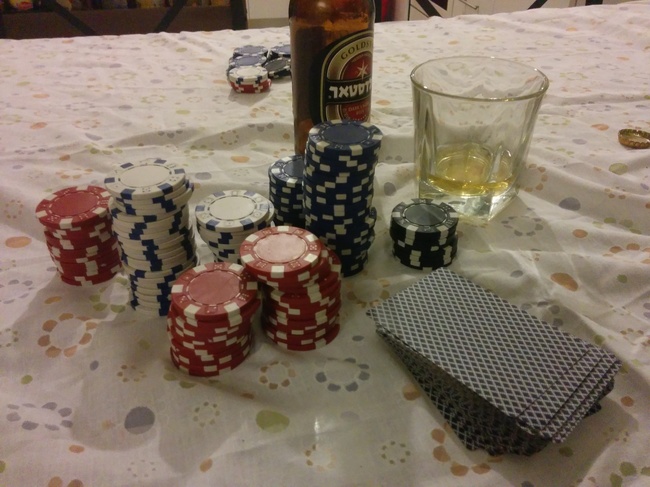 My friend Dani took me to the most wonderful coffee shop I’ve ever been to. 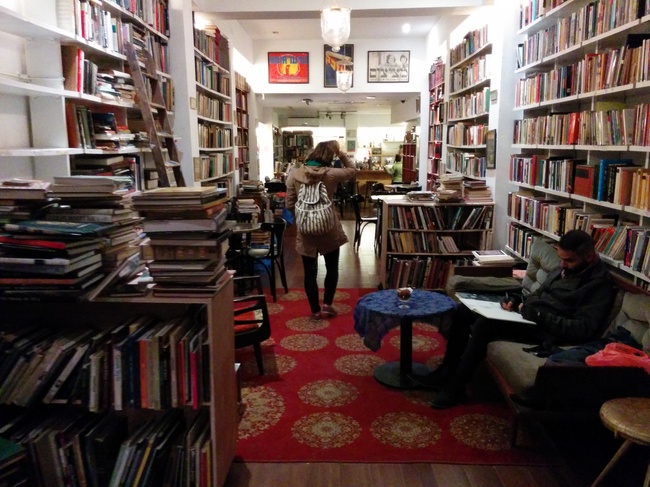 Quick picture in Bethlehem in the West Bank. Visiting the Palestinian region is a whole blog post in itself. 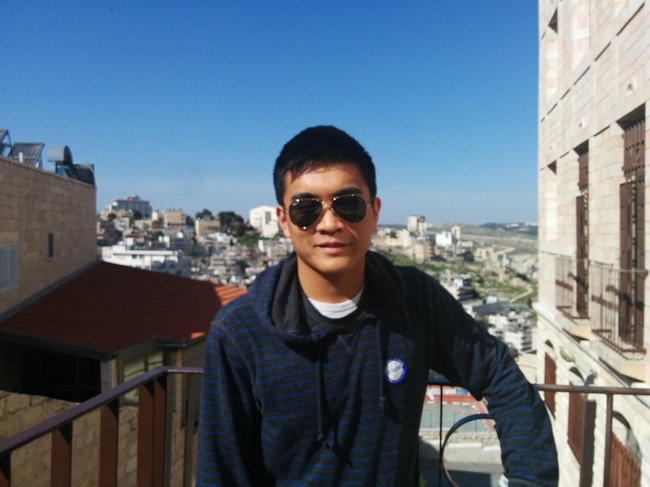 As a conclusion, I will say that Israelis are some of the most genuine, open, and sincere people I’ve ever met while traveling. Even as an outsider, I could truly feel the beauty of the Jewish community in Israel - built upon love, respect, and a common understanding of life. I can’t wait for a chance to return.

Edit: Thank you for the many messages and comments in response to this article. While originally writing this post, I purposely tried to avoid the subject of the Israeli-Palestinian conflict. This is a very intense issue with many nuances that I cannot even begin to understand, much less explain. However, I realize now that by avoiding the issue, this article can be interpreted in a way that is different from how I originally intended. I’d like to be clear: this article seeks to document my experiences as a tourist. I have no opinion on the actions of the Israeli government or the PNA. To learn more about these issues, I encourage readers to seek the many online resources available. Thanks again for reading!

What I learned from building the same website three times

In college, I built a website called Grouptale, which I described as a tool to “make deliberations easy”. I was part of many student organizations in college where membership was selective. In a lengthy “deliberations” process, current... Continue →