What I learned from building the same website three times

In college, I built a website called Grouptale, which I described as a tool to “make deliberations easy”. 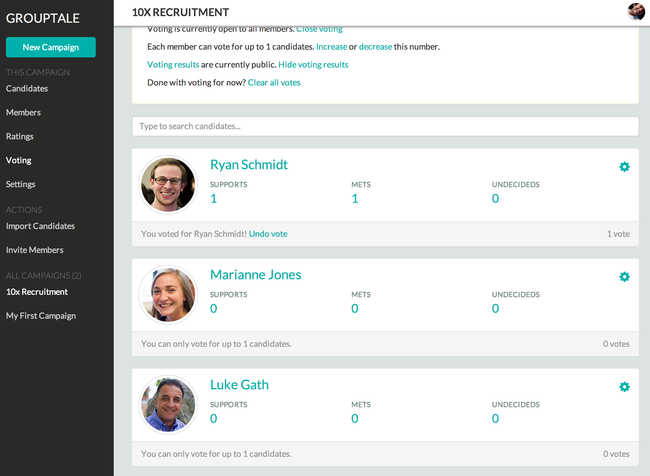 I was part of many student organizations in college where membership was selective. In a lengthy “deliberations” process, current members of the group would discuss prospective candidates, and eventually come to consensus on who would be selected to join.

Deliberations is always a painful process. Groups traditionally used spreadsheets (or even physical notebooks) to keep track of candidates, and the final rounds of debate over candidates could drag on for hours.

The idea for Grouptale is a very simple tool that groups can use to organize, comment, discuss, and even vote on candidates.

At its peak, Grouptale had around 200 active users in over 10 organizations at Harvard. It’s not the next Facebook, but Grouptale is a very special product to me because of the many learning experiences I gained.

I built Grouptale a total of three times; the first time was during the summer of 2013. 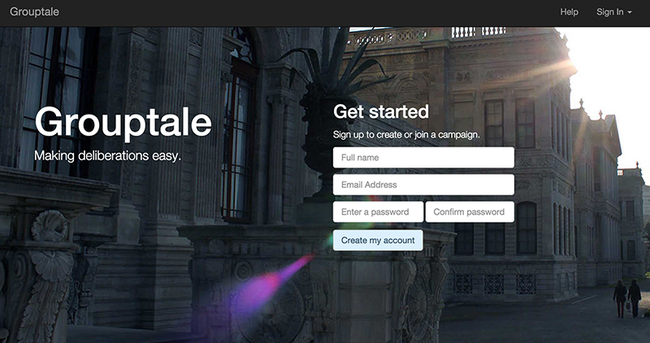 During the fall of 2013, I launched this first version to two student groups at Harvard. Even though it was only around 30 people using the site, having real users made many shortcomings in the site painfully obvious. I’ve documented some of my learning lessons below.

Don’t force account creation: In this first version, users needed to sign up for an account in order to use the site. This seemed straightforward, but in reality, it turned out to be a major speed bump. When I asked friends to help me test the site, most were initially willing, but then the hurdle of account creation stopped them. In future iterations, I worked very hard to make sure signing in was a single click of a button.

Take the user to the content quicker: In this first version, a user would have to choose which campaign they wanted to access immediately after signing in. I quickly realized that this was an unnecessary step.

In future iterations, I made the choice for users - they were automatically dropped into a certain campaign; if they wanted to see the content from a different one, they could switch.

The web must be real-time: This first version of Grouptale was built on Rails, and consequently did not support real time commenting, voting, etc. Users would have to refresh the page to see updates. It doesn’t seem so bad, but for a collaborative tool like Grouptale in today’s modern web, the lack of real-time functionality was crippling. 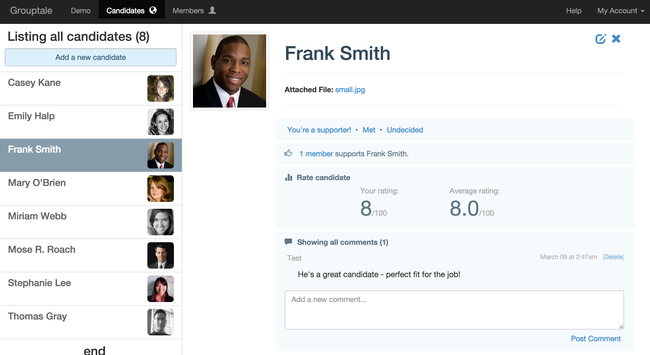 Take pride and ownership of my own products: When I first asked the Harvard Foundation to try Grouptale, I was reluctant to reveal that I was the one who built it. I think it had to do with my pride - I didn’t want to seem like a desperate entrepreneur.

However, I realized that it was wrong of me to hide my ownership of the product. It was very liberating once I was able to swallow my pride and engage more directly with Grouptale’s users.

A semester later, during the winter of 2013, I took these learning lessons and applied them to a second version of the site, which I was hoping to launch in the spring semester. 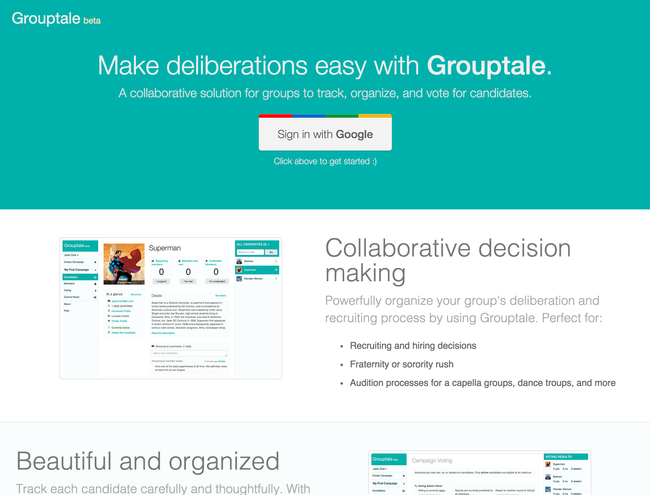 In this version, I built with Meteor, a Javascript web framework that gave it real-time functionality.

In addition, I forced users to sign in with Google, which actually increased engagement. This was partly because all Harvard students have a Gmail account, and partly because it increased the speed and simplicity of sign in.

Finally, I put more effort into the UI, and worked hard on a bold look and feel. Funny enough, it was originally going to be purple, until my girlfriend at the time knocked some UI sense into me and choose the teal color that remains today.

However, there were still many lessons to be learned. 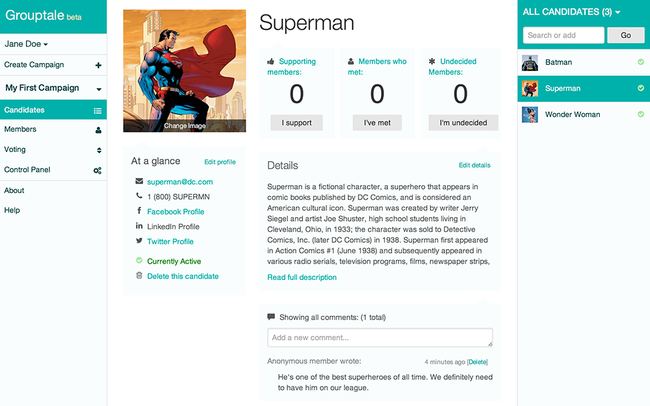 Three columns is too many: I originally thought that a three column layout would allow users to more easily navigate the site, but as soon as I observed users, I realized that I was completely wrong. Three columns proved to be confusing, and took up way too much screen space.

More scrolling, less clicking: In this version of Grouptale, a user would need to click within the right sidebar to switch between candidates. I noticed after launching that clicking was a very expensive operation, and it was tiresome for users to switch back and forth constantly. I realized that scrolling was much easier and much more natural, and this was something I optimized for in Grouptale’s third iteration.

Make sharing easier: I spent more than a week developing a feature that allowed users to invite members to their campaign via email.

However, after launching, it was clear how incredibly painful this feature was to use. I later implemented a feature where users could simply share a link to join, and after that not a single email invitation was used again.

Mobile first, desktop second: Here’s a screenshot of what Grouptale looked like on a mobile device: 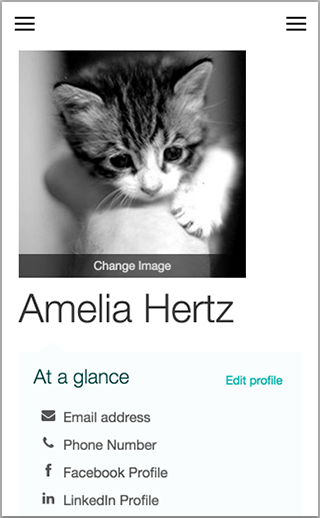 Yes, there are two hamburger menus at the top of the page. Gah!

I poignantly remember watching my friend try to use the site on his phone, and throwing up in my mouth a little bit.

This version of Grouptale was optimized for the desktop, and just so happened to work on mobile. A major learning lesson for me was that for a product to be successful in today’s world, it needed to be built the other way around.

During the summer for 2014, I had some free time and began working on the third (and current) version of Grouptale. 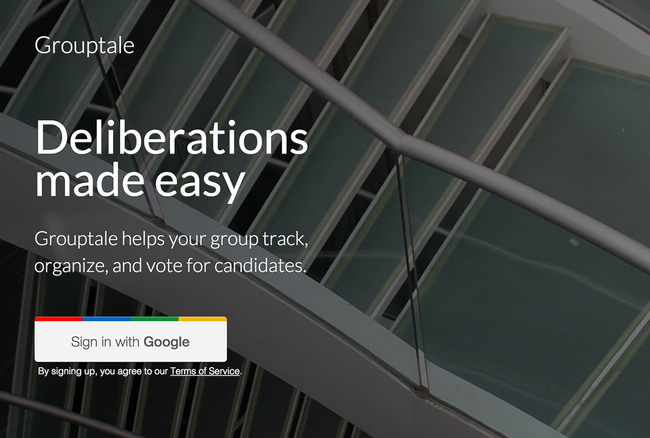 I made many improvements in this iteration, based on the feedback from Grouptale’s previous launches. In this version, I returned to a two column layout, optimized for scrolling, and played with a new font - Lato.

Grouptale became something that was much more of a joy to use on all devices. 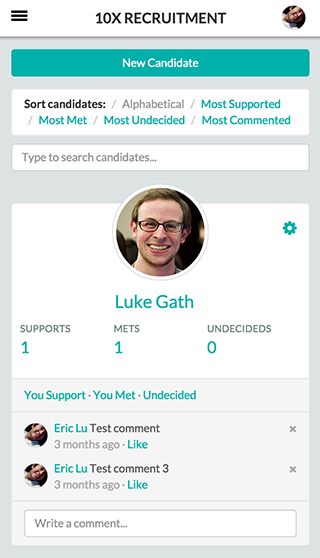 Interestingly, my learning lessons from Grouptale this time around were less centered around product or design, but more on the business side.

A successful product can’t just be better, it must be 10x better: Many groups already had a system for organizing candidates. Some used Google docs, others had a designated point person who would organize everything. The act of switching to a new platform took a high amount of activation energy. I realized that Grouptale only marginally improved the deliberations process, but to truly be a game-changer, it needed to be far better than existing systems.

A good product doesn’t imply a good business: I learned that there is a huge leap between a user’s willingness to use a product, and user’s willingness to pay for the product. Most users expect online tools like Grouptale to be free. I slowly realized that building a successful business was far more complex and involved than simply putting this website online.

It’s better to create something that everyone can use: One of the challenges I faced when launching Grouptale was that it was only applicable to a specific set of folks: people in groups who held a deliberations process. Many of my close friends were not in such groups, and because of this, they weren’t really able to engage with the product, or give meaningful feedback. I realized that there is far less friction to launch if a product can be used by anyone.

There’s no such thing as pride for an entrepreneur: I realized that it takes boldness and courage to promote a product, and this was by far the hardest challenge for me. In launching Grouptale, I had too much pride to spam my friends and ask for them to help try the product. I didn’t want anyone to feel bothered or pestered by my requests. However, I realize now that in order to bring a successful product to life, I will have to swallow my pride and shamelessly promote the product. Friends, be prepared :)

Recruiting is very, very hard: Throughout the time that I worked on Grouptale, I would often reach out to my friends in the CS department, and ask if they would like to help write some code or contribute to the site. I thought that since Grouptale had real users and clear potential, it would be easy to convince other students to help me build it. While some of my friends initially expressed interest, in the end I was the only one who committed code to the site. Convincing people to work with me was much harder than I anticipated, and now I can feel how hard recruiting is for any startup.

That said, the success that Grouptale had would not have been possible without the support of many of my friends. There were many people who used the product because they believed in me, not Grouptale. I can’t begin to express how thankful and touched I feel from everyone’s support. 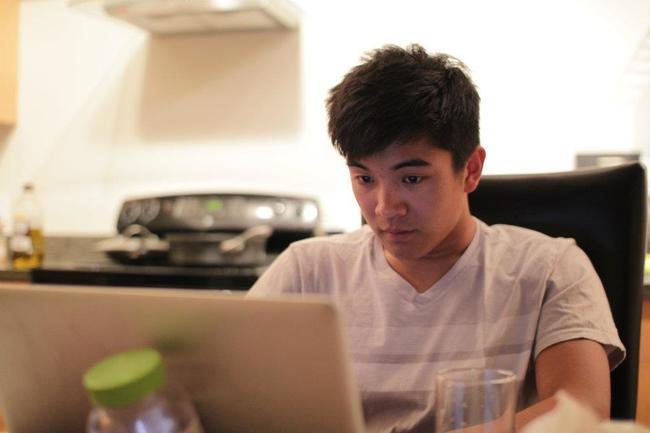 I’m no longer working on Grouptale now. Instead, I’ve been focused at my job, and also doing a little soul searching.

While I can’t promise how well they work, the three versions of Grouptale are still online if you’d like to play around!

Thanks for reading! If you have thoughts, I’d love to hear them - tweet me @realericlu.

At the end of February, I was lucky enough to travel to Israel to work face-to-face with our team in Tel-Aviv. It was primarily a business trip, but I did get the chance to explore the region a little while I was there. It’s painful to... Continue →